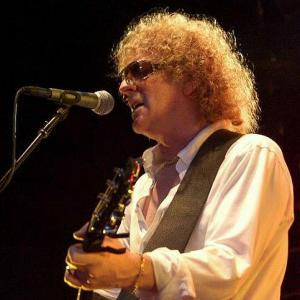 On September 3rd I reviewed the wonderful title track of this album, and seventeen days later Mr. Hunter is scheduled to be on my TV show, Visual Radio Live, 8:00 PM carried on wincam.org  We’re going to explore his album in depth, but right now, here are my immediate thoughts.
“Comfortable (Flyin’ Scotsman)” has a roller coaster “Brown Sugar” ride resplendent in that classic style familiar to Mott The Hoople fans around the globe.  The Rolling Stones may have been exiled on Main Street back in the 1970s but as Ian Hunter crafts album after album with solid songwriting his musical essays are expanding the original vision while simultaneously migrating from label to label.   1995′s Dirty Laundry was on Cleveland International, 1997′s Artful Dodger on the OutofTime imprint, 2000′s Rant on Fuel 2000, the live DVD Just Another Night on MVD (2004)the beautiful Strings Attached on Sanctuary (2005),  Shrunken Heads on YepRoc (2007),   Live In London – a cd release of some of Just Another Night on The Great American Music Company (2007), Man Overboard on New West (2009) and now, three years later, When I’m President on Slimstyle Records (2012).
If you’re counting that’s nine labels in 17 years, an amazing feat in an era when hit radio is controlled by corporations spoon-feeding nonsense to the masses.  We can thank Congressman Ed Markey (located right down the street from my home where I write this) and the usually reliable Bill Clinton for the disarray. The Telecommunications Act of 1996 didn’t work out the way Markey and Clinton figured it would, and the radio industry as we knew it no longer exists.  Nor does the record business, two components of alleged “free enterprise” that have exacted even more hardship on creative artists and their fans.
And perhaps that’s the submliminal message that “When I’m President”, the song, sends out.
This album rocks with authority, picks up and delivers, and has some unique surprises. “Ta Shunka Witco (Crazy Horse)” is not an ode to an old Neil Young band, nor is it Paul Revere & The Raiders’ “Indian Reservation.”  “Ta Shunka Witco (Crazy Horse)” quotes the film Galaxy Quest’s battle cry “Never Surrender” (well, their rant was actually “Never give up! Never surrender!”).   It’s a slow, dreamy, eerie stylistic change for Hunter, and it is brilliant.   Where 2009′s Man Overboard had its moments the CD When I’m President chugs along with the inspiration we want…and expect…from this rock icon.  “What For” could have been an out-take from Brain Capers or Mad Shadows, vintage Hunter in great voice and a charging Rant band that is relentless in its execution.  “Black Tears” is another abrupt change of pace, everything falling into a groove with stylish lyrics and splashy sounds from the very efficient and very spontaneous band, Ian churning out the passion in a way the rock-star-wannabe 20somethings of today have yet to provide… or experience.
“Just The Way You Look Tonight”   is not a cover of the classic Frank Sinatra tune (“The Way You Look Tonight”, no “just” in the title), nor a take-off on former (early, early) almost Deep Purple musician’s “The Way I Feel Tonight” (made famous by the Bay City Rollers), it’s a fun stomp that has magical instrumentation and an eloquent expression from the veteran frontman.   The entire album works, “Wild Bunch” deserving special mention, and while Man Overboard had an extraordinary few moments (“Arms & Legs”), this album has Ian Hunter being Ian Hunter, a great leap forward, a welcome return to what the fans love about this icon.   He’s got our vote.
Ian Hunter, When I’m President – Track Listing 1. Comfortable (Flyin’ Scotsman 2. Fatally Flawed 3. When I’m President 4. What For 5. Black Tears 6. Saint 7. Just The Way You Look Tonight 8. Wild Bunch 9. Ta Shunka Witco (Crazy Horse) 10. I Don’t Know What You Want 11. Life