This will be a "double-issue" with special mentions of great discs from the past two years along with the new material being sent to Ultrabox 2392, Woburn, MA 01888 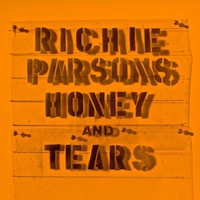 Honey and Tears is a terrific solo disc from Richie Parsons, lead singer/guitarist in Unnatural Axe.  With songs like "Love Letter," "Evelyn," "Nowhereville" and opening track "When Fall Begins," we get the softer, pop side of Richie, and so well it works with cascading instruments and vocal sensitivity as on "Hey Little One."     "When You're Dancing" is not "No Surfing in Dorchester Bay," it is mature and elegant as this is an album of love songs infused with lots of ACP -  adult contemporary punk.

"Summer" might be the sequel to "Can't Wait for the Summertime" with its guitar that the Tornados ("Telstar") almost veered towards, and the Ventures would over-indulge in.  Nicely placed -as are the acoustics on final track "Right On Time."  "Blue Sands"  works well with "Summer" and is an adult beach party song for Antette Funicello and Frankie Avalon 20 years after the American International Pictures teen craze of the 60s. A lament with lots of layered guitars after the surfboards have been put away and the aforementioned Dorchester Bay is safe from the rowdy twenty-somethings. All that's needed is Roxy Music's Andy Mackay  to bring his Wild Weekend on board


"Mix Tape" is a strong splash of melody and rock and roll drive that takes jangling guitars and puts them underwater, think the Flamin' Groovies tempting the grunge fates but not falling over the cliff.    Parsons should push this song on hundreds if not thousands of radio stations ...it has all the elements  A cover of Lou Reed's "Love Makes You Feel" works, always nice to cover the master.

Play both videos at once and see what happens, even if you have one 3 seconds behind the other.

Extra credit goes to: "Mix Tape," "Evelyn" and "Love Letter" - they are most outstanding.

Remember - Outrospection is a way to get to know oneself by developing relationships and empathetic thinking with others. 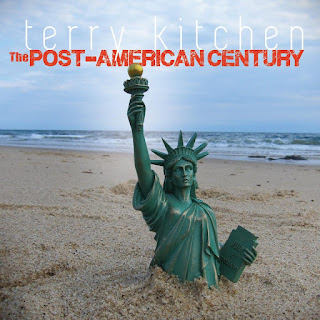 Former Loose Ties band member Terry Kitchen returns after 2014’s book/cd combo Next Big Thing presenting his The POST-AMERICAN CENTURY album. Ten songs with a bonus track of the one minute twenty-four second “One More Sunset,” this collection is reminiscent of Gordon Lightfoot’s worldy point of view, with lots of hope tucked inside the melancholy mood of some of the material.
With a Francisco Gonzalez  cover on the gatefold, straight out of `1968’s Charlton Heston, the original Planet of the Apes, the Boston area/New England folk veteran mixes upright bass, mandolin and harmony vocals to “So Much More To Home.” This is perfect music for WUMB, the mega-station at UMass Boston which should embrace and highlight this material.  “Sequel” evoking feelings from the past, this new American century in need of or searching for a label, is the closest thing to a title track with the album’s name repeated in the refrain.   Kitchen keeps his cover of Neil Diamond’s “I’m A Believer” under four minutes.  The approach is Ric Ocasek of the Cars back in his MIlkwood phase on Paramount Records, a tight rhythmic strum turning the Monkees pop classic into John Sebastian playing post-concert in a coffee shop.  Very nice approach.
The material goes from three to five minutes, story songs like “Rock of Ages” perhaps the other side of the aforementioned Diamond’s “"Brother Love's Travelling Salvation Show"  - the singer telling a story from the audience’s perspective.  “One By One” is not the Randy California songs from the 1990s, one of the final great moments for the band Spirit, but you can hear California singing this, an elegant bit of outrospection, if you will.  The longest track, “Tall Against the Wave,” at 5:15 is a civil war lament, a story-song a la Gordon Lightfoot’s “The Wreck of the Edmund Fitzgerald” and a perfect medley song begging for “The Night They Drove Old Dixie Down” to follow.  Perhaps live in concert.  “Eternity,”a video from the album, gives a nice look into the serious fun Terry’s crew bring to this sophisticated and splendidly performed music.
Terry Kitchen’s author information on each song
About the SONGS on Terry Kitchen's
The Post-American Century
1. "So Much More to Home"  My friend Andy Dunn and I were talking at the Falcon Ridge Folk Festival a few years back. His wife was extremely pregnant, and my wife and I had just bought a house, so even though we were surrounded by great music we were both being pulled by thoughts of home. We took a break from the crowd and wrote this song. With Bob Harris on mandolin and Mara Levine on harmony.

2. "Sequel"  If the 1900s are regarded as "The American Century," what does make the 2000s? Lots of great songs were written in the '60s about freedom and finding ourselves. I got to wondering about how all those lives turned out, and got this song. With Mara Levine on harmony.

3. "Perelli's Barbershop"  As places where men gather to wait their turn, barbershops are filled with "guy" magazines - Car & Driver, Sports Illustrated, and maybe even a Playboy. In those innocent pre-internet days when I was growing up, a Playboy was a big deal indeed, especially to a ten year old boy.
With Roger Williams on Dobro.

4. "Tall Against the Wave"  April 2015 marked the 150th anniversary of Lee's surrender to Grant at Appomattox, effectively ending the Civil War, and I was surprised how little attention it got. It might be worth remembering in this time of un-civil politics how bad it can be. Lee had assigned Joe Johnson the task heading off Sherman on his march back from Georgia, and they clashed at Bentonville, North Carolina, when the war was all but over. With Amy Malkoff on harmony and Chris Devine on fiddle.

5. "Stay Forever"  We do our best to be caring and brave when confronted with the loss of a loved one, but behind the façade we're angry, hurt, confused and scared. Or at least I am. With Phyllis Capanna on

harmony and Brice Buchanan (from my '80s band Loose Ties) on guitar.
6. "Rock of Ages"  When I visit Nashville I stay on my friend Steve's couch, and down the block is a very small and humble-looking church. Even though I'm an atheist I appreciate the fellowship and community people can find there when they really need it. With Roger Williams on Dobro, and Brice Buchanan and Deede Bergeron on harmony.
7. "Eternity"  When we're young we race to grow up, then when we get there we futilely try to slam on the brakes. Good luck. A country duet in the tradition of Porter and Dolly, with Mara Levine on duet vocal.
8. "One by One"  In a country with an African American president, it's tragic that far too many still pay the ultimate price for merely having the wrong color skin. The list keeps growing ‒ Trayvon Martin, Michael Brown, Jordan Davis, Clementa Pinckney and on and on. Pete Seeger taught us we shall overcome, but it has to start in the hearts of each of us. With Mara Levine on harmony.
9. "Mommy Come Quick"  My mother (Peachy to her family and friends) passed away last fall on her 86-and-a-half birthday. As her Alzheimer's progressed, she lost more and more of her abilities, and our roles reversed. Seeing her so childlike made me remember my own young childhood, when I was helpless without her. With Don Barry on upright bass.
10. "I'm a Believer"  In my novel Next Big Thing, the fictional band Shadowland's first big hit is a Monkees cover, pissing off songwriter/main character Mark Zodiac. Will life imitate art?


The Night They Drove Old Dixie Down
https://www.youtube.com/watch?v=NnyeqyCiLdo


Jaimie Brockett
Remember the Wind and the Rain
https://www.youtube.com/watch?v=E-pqYthi6-0 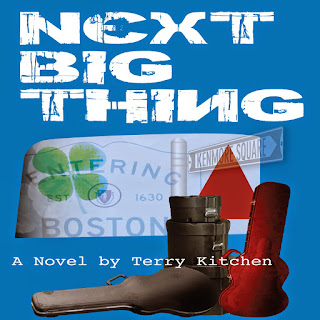 Music Review: Songtrack to the Book ‘Next Big Thing’ A Novel by Terry Kitchen

It’s fantastic that author/songwriter Terry Kitchen has released the free CD that comes in the back of his novel, Next Big Thing, as a solo disc – Songs from Next Big Thing. The ten-song disc absolutely stands on its own as a work of art,

Take track 4, “Second Glance,” four minutes and forty-eight seconds of inviting and pleasant guitar work from Brice Buchanan (also on harmony vocal) and Kitchen, who also plays bass, percussion and lead vocal. Opening with a pretty guitar and shaker accompaniment (and what sounds like a keyboard) Terry’s insightful lyric dances alongside the guitars.

Two of the tracks were recorded in the 1980’s by Terry’s notable Boston band, Loose Ties, Song 7 was produced by Kearney Kirby of the November Group at Baker Street in Watertown, 1984. The “funk mix” is four minutes and twenty six seconds of “sex so strong, just kills all else” – perfect for the 1987 James Bond flick, The Livin Daylights, which A-ha got to do (instead of Charlie Farren, whose own “the Livin’ Daylights” song is much, much better. Loose Ties band mates Bill Kuhlman (bass, vocal), the aforementioned Buchanan, Chris Peeler on synth drums and Terry Kitchen on guitar all provide a steady and intriguing blend. Find the credits to this CD on Terry’s webpage.
Track 9, “Get Out of My Novel” is, of course, complementary to the book. This is the Loose Ties as well, recorded by Jeff Shirley at the Somerville Media Action Project, Somerville, MA, 1988. It’s a perfect snapshot of 1988 Boston rock, reminiscent of Dutch Courage, another group from the region who rocked out in the 1970s.

There’s a special place in my heart for “Ghosts Of Kenmore Square” – especially having lived it since 1974. Deirdre Bergeron and Brice Buchanan add harmony vocals to Terry’s guitar and voice, Brice adding some guitar as well. It’s a slow-tempo march that tells one perspective of life down at the Rathskellar on 528 Commonwealth Ave. Superb.

Opening tune, “Killing Time,” has an eerie mood, Kitchen utilizing this feel to good effect across the CD with his guitar musings. Would actually be a nice soundtrack song to scriptwriter Danny Garcia’s 2014 movie Six Bullets to Hell, filmed on the same set in Spain as 1966’s The Good, the Bad and the Ugly and other Clint Eastwood “spaghetti westerns.”

This “songtrack” has a multitude of styles, which is a natural, of course, for the songs accompanying the ideas in the novel…and sets the stage for filmmakers to build a movie around the chapters and each song.