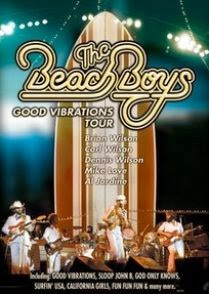 The Beach Boys are one of the most fun pop groups in music history and Eagle Rock Entertainment puts together some of the best packages in 2013, so the release of The Beach Boys: Good Vibrations Tour on DVD and Digital Video is a treasure for fans as well as for music historians.
The liner notes inform us that the show was “Filmed in 1976 at Anaheim Stadium for American television, Good Vibrations follows the release of their 15 Big Ones album. Combining full live performances with interviews and several whimsical vignettes, Good Vibrations is 50 minutes of Beach Boys …(and)  features all the original band members (Brian, Carl, and Dennis Wilson, Mike Love, and Al Jardine) performing their timeless classic hits: “Good Vibrations,” “God Only Knows,” “I Get Around,” “Fun, Fun, Fun,” “Sloop John B,” “California Girls,” “Help Me Rhonda,” “Surfin’ USA,” and many more.”
Prior to the age of YouTube it was only select artists who got to utilize national TV to promote a new album. The late John Denver made a cottage industry of it; and the late Lou Reed was said to have walked out of an RCA records board meeting amazed at the units Denver sold because of the TV exposure. The Beach Boys were in the position to command such an adventurous – and exciting – display and looking back, music fans are the better for it.  You will hear the concert, but there are overlays and interview footage that cut into the musical performance. That’s ok, this DVD captures the sounds and the costumes for aficionados to enjoy.  This isn’t a high-tech Rolling Stones concert of the past 20 years, the film texture has the feel of the Lee Majors TV show Six Million Dollar Man, but the period piece aura adds to the ambiance.

More of the press information states the DVD contains “Dennis Wilson judging a beauty pageant, Carl Wilson flying a plane and Brian Wilson being arrested for violation of the surf code by the original Blues Brothers, Dan Aykroyd and John Belushi, in the guise of highway patrolmen.”  OK, that Belushi/Akroyd/Brian Wilson bit is a little over the top, and maybe draws the cringe factor and a quick fast forward after one viewing, but it’s the music of the time being captured for our enjoyment that really matters, and despite some of the excesses of the on-stage costume (and glitter routines) it is still America’s original party band doing their thing and the music that we love comes through loud and clear. Good vibrations indeed!
Track Listing 1) Fun, Fun, Fun 2) Be True To Your School 3) I’m Bugged At My Ol’ Man 4) God Only Knows 5) I Get Around 6) You Are So Beautiful 7) That Same Song 8) Good Vibrations 9) Sloop John B 10) Surfin’ USA 11) California Girls 12) Help Me Rhonda 13) It’s OK 14) Rock ’n’ Roll Music 15) Wouldn’t It Be Nice


WATCH FOR THOR, THE DARK WORLD
This Thursday midnight is when review will post