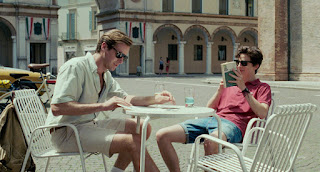 Armie Hammer, whose chemistry with Henry Cavill in The Man From U.N.C.L.E. superseded the sideways script,

32 million worldwide as of March 5, 2018 on a 3.5 million dollar budget  with
filming in 2014, the six million Wikipedia notes that Sony Pictures Classic paid made it a financial winner to begin with.  Hauling in 30 mill plus with the sky being the limit, it should pave the way for more films of this nature, perhaps ending the curse of the heartbroken homo...at least to a point.

IMDB notes that Armie Hammer's father is a member of the board of trustees for Oral Roberts University, and his mother, a former bank loan officer, teaches Bible study in Los Angeles.  Bible study and a university where the joke is "What do you call two gay bobs?  Oral Roberts! is the irony here.   And which begs the question, what do those who attend the Bible study class of Mrs. Hammer and the good people of Two Gay Bobs College  (Oral Roberts Univ.) think of the son of one of the board of trustees for engaging in a film that endorses the lifestyle and strips away the depravity of such classics as The Boys in the Band (IMDB: Tempers fray and true selves are revealed when a heterosexual is accidentally invited to a homosexual party,) Myra Breckinridge, Brokeback Mountain where the homosexuals are always cast as auditioning for some Shakespearean tragedy, and other film noir which made the "love that dare not speak its name" such an ugly spectacle.

Handsome Jake Gyllenhaal beaten to death with a tire iron in Brokeback Mountain, effeminate Emory (actor Cliff Gorman) in William Friedkin's 1970 classic The Boys in the Band - a film that NEEDED an Exorcist but came to being three years before Friedkin's horror classic, Raquel Welch getting hit by a car with her fake breasts flying through the air only to find herself (when she comes to)  waking up as bad actor Rex Reed (don't know which is worse, the flying breasts or looking in the mirror some morning and seeing Rex Reed staring back?) - the homosexual always ended up in films as a)the heavy, b)the bad guy heavy, c)the forlorn, rejected, disgusting deviant, d)all of the above

Armie Hammer truly takes the Allman Brothers 1970s album classic Eat A Peach to a new level after Timothee Chalamet* makes a kinda sort of deposit in said fruit, which - on paper - sounds pornographic but, in the context of the film, had the audience at the Davis Square Theater on Saturday, March 3, 2018, bursting into laughter.   A much needed break as the tension in the film is obvious: why are two men engaging in intimacy a floor or two above the young man's parents?  You fear they will be outed; Oliver, Hammer's character, expresses that fear to Elio the morning after.  The seven year difference between the two men seems, perhaps, even greater given that Oliver is working closely with Elio's father.

(*Chalamet, born Dec. 27, 1995 - was about 19 when he made this film and would have been about 14 when he guest starred in the 2009 Law and Order SVU's Pledge as the pledge murdered in the very emotional episode of that television drama.)

Hammer, born August 28, 1986, was about 28 in 2014 when he filmed Call Me By Your Name,  in a movie about an affair between a 24 year old and a 17 year old.  Certainly not Lolita - a twelve year old obsession of the character from the Russian novel and which has become a bit of a label, tag, bordering on epithet for allegedly promiscuous young women.  This film portrays two adult men in a heterosexual world negotiating the secret rendezvous, and quite accurately captures the difficulties of being a teenager falling in love with the odds stacked against you from the get go.   Gay teen suicides are more frequent than most, this study noting: Suicide is the 2nd leading cause of death among young people ages 10 to 24.1; LGB youth seriously contemplate suicide at almost three times the rate of heterosexual youth**

At the age of 16 I viewed The Boys in the Band at the Regent Theater in Arlington and it was a head spinner.   Again think Exorcist when you think William Friedkin.  Today I find the film hilarious, but as a youth it was grim, it was scary, and made the lifestyle look most unpleasant...and in that day, let's face it, in 1779 Founding Father Thomas Jefferson wrote a law which contained a punishment of castration for men who engaged in sodomy    https://en.wikipedia.org/wiki/Sodomy_laws_in_the_United_States

The brilliant Oscar Wilde was imprisoned for being homosexual, and in 1970 it was illegal in most states in America to be a same sex person.

Jefferson believed in a free press (???) while having written a law meant to harm men who were born into an allegedly free society!  Total absurdity when viewed through logic, a logic that dictates we fight for our freedoms on a daily basis.   In 1969 this film, Call Me By Your Name, would have been rated X.  Today it is thought-provoking entertainment.

Through the 20th century, the gradual liberalization of American sexuality led to the elimination of sodomy laws in most states. During this time, the Supreme Court upheld the constitutionality of sodomy laws in Bowers v. Hardwick in 1986. However, in 2003 the Supreme Court reversed the decision with Lawrence v. Texas, invalidating sodomy laws in the remaining 14 states (Alabama, Florida, Idaho, Kansas, Louisiana, Michigan, Mississippi, Missouri (statewide), North Carolina, Oklahoma, South Carolina, Texas, Utah, and Virginia).

**Facts About Suicide – The Trevor Project 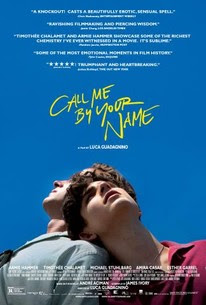